Dobermans are a low-maintenance dog breed and don’t require much attention, but you must stay cautious about their health. If you have a female Doberman, they will go through heat twice a year. Now you must be wondering what is heat and how to deal with that?

Heat is also famously known as the estrus period. It is a reproductive stage that unspayed female Dobermans will go through. During this stage, the eggs in the Doberman’s ovaries will mature. And you may also witness different behavioral, hormonal, and physical changes. Scroll down to know more:

What are the common signs?

There are different ways to identify that your Doberman is in heat. The female Dobermans experiencing heat will display specific behavioral and physical changes. But some female Dobermans will not show any common signs that can help to determine whether your Dobie is in heat or not. Hence you need to be cautious.

A few common signs that indicate that your Doberman is experiencing heat are given below:

Another common sign that indicates that your Doberman may experience heat is vaginal bleeding and unusual discharge. Initially, the discharge will appear red, and eventually, it may turn into a straw-colored discharge. But this bloody discharge may decrease once your Dobie enters her heat cycle. These changes are generally considered normal and can also be regarded as vital signs to show that your Doberman is ready to breed.

Though this is a common sign, it is challenging to identify because Dobermans love to stay clean and may be licking their private parts to cleanse themselves.

If you notice that your Doberman is frequently and excessively licking her private parts, it is a sign that she may be nearing her heat cycle. Most Dobermans will lick the underside around their vulva region because your dog wants to clean herself from the bloody discharge. This behavior is more common among Dobermans as compared to other breeds. However, not all Dobermans showcase the same kind of behavior. Still, if anyone does, it becomes easier to identify if your Dobie is about to or has already entered her heat cycle.

At the beginning of their heat, Dobermans may showcase some abnormalities such as hiding under the table, acting more irritated, cowering, excessive barking, and aggression.

By noticing the position of the tail, you can also understand whether your Dobie is in heat or not. Before or at the beginning of the season, the Doberman will be seen tucking her tail more often than usual. She does this to protect her swollen valva region. However, later on, in her heat cycle, she may move her tail to the sides or keep it raised in the presence of males, indicating that she needs mating.

Tucking or Raising her Rear End

Initially, to protect their swollen vulva, a female Doberman will frequently sit or will often tuck the rear end, especially when other dogs approach. But later on, they will be seen raising their rear end more frequently to attract the male dogs.

Your Female Doberman may experience changes in appetite during or before their heat cycle. This is considered to be very normal during a heat cycle. However, it is recommended to consult a vet regarding this because an increase and decrease in appetite can also be symptoms of different health issues.

You will also notice that while your Doberman is in its heat cycle, she wants to stay closer to you and requires a lot of affection and care. She may want to stick to your side, and it might be possible that she will follow you around your home.

Like humans, female Dobermans also behave more irritably during their heat cycle. Although most the Dobermans seek more care and affection from their owner, some will stay more irritated during their heat cycle. Some Dobermans also experience mood changes and stay grumpier all day. Grumpy Doberman will behave more aggressively than others. Hence it is essential to show more care, affection, and caution in dealing with this.

The first heat cycle of your Dobie

As Doberman mature, they will experience hormonal changes in their body. It can result in an increase in estrogen that leads to the production of eggs in female Dobermans’ ovaries. If mating occurs, then the egg will be fertilized. The female Doberman will have her first heat cycle around 6 to 12 months of age. And once it starts, it will occur two times a year. A heat cycle will last for around three weeks. During these three weeks, your Doberman will experience different stages of the heat cycle. The different stages of the heat cycle are as follows.

There is no such thing as the last heat cycle of a Doberman. The Dobermans will experience heat cycles throughout their life. A Doberman will stay fertile until death. And can be pregnant unless she is spayed. However, with passing time, the duration of the heat cycle will increase. If you notice that your female Doberman is missing her heat cycles, it can be a sign of any underlying diseases. And you should take her to the vet for a check-up.

How to Comfort your Doberman while experiencing heart?

As the heat cycle continues for three weeks, your dog may experience some uncomfortable symptoms. But you can do something to comfort your Doberman, such as:

When should you see a Veterinarian?

If you cannot understand any signs, you should always seek advice from a vet. But below, we have provided some specific incidents where you may need to go to the vet, such as

A professional and experienced vet will give answers to all questions. In some cases, the vet will conduct certain physical tests or ask you questions about your Dobie to better understand your query.

We hope the above-mentioned points are helpful and make it easy for you to understand the different signs your Dobermans will show while going through the heat.

What are the first signs of heat in a dog?

A few signs of heat in a dog are swollen vulva, physical and behavioral changes, increased licking, bloody discharge, and so on.

When can you start breeding a female Doberman?

Female Dobermans will become fertile between the age of 6 to 15 months. However, it is recommended not to breed your Dobermans until they reach at least two years.

How long does a Doberman stay in heat?

A heat cycle lasts around 2 to 4 weeks.

At what age do Dobermans go into heat?

Usually, between the ages of 6 to 8 months, Dobermans go into their first heat cycle.

What are the four stages of a dog in heat?

There are different heat cycle stages, such as Proestrus, Estrus, Diestrus, and Anestrus.

How to know if your Doberman is Pregnant: Symptoms and Signs to look for 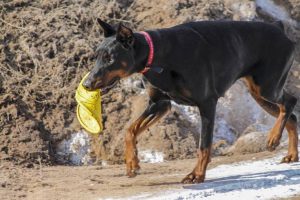 Dobermans, commonly known as Doberman pinschers, are a breed of loyal and 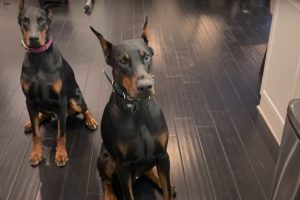 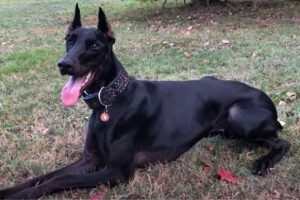 Many dogs don’t like being on a leash, is what people say.