The Doberman is a man-made dog breed. They are very loyal, intelligent, robust, and large breed dogs. The breed was specially bred to work as a guard dog. And one of the most desirable characteristics of Doberman is their protection ability. This is why people want to adopt or get a Doberman for their family. Though many people want to add Dobermans to their family, they sometimes don’t want or aren’t able to train their Dobies. And here comes the question in the mind of many owners: whether an untrained Doberman can protect its owner or not? Scroll down to get the answer to this question.

The Doberman breed has a great collection of traits that make them more likely to instinctively protect their owners from potential danger. And with a bit of praise and confidence, which are reinforced to them through certain activities during daily playtime, can increase the Doberman’s confidence. Through this, the Doberman will physically protect its owner whenever they feel threatened or necessary. Let’s discuss this in detail below.

Dobermans are made to work as protection dogs; hence they have different physical features. A few physical characteristics that make this breed suitable for protection work are-

Guiding Instinct of the Doberman

The breed of Doberman is considered to be the world’s only dog breed that works as a protection dog. They have an impressive drive to protect their owner. A few guiding instincts are given below ingrained.

Highly connected with their owner.

Dobermans are highly connected with their owners; they can sense how apprehensive their owners are in any given situation and react accordingly.

As compared to other dog breeds, Dobermans are known to be more fearless. They will not run away from any scary situation; instead, they will challenge and fight with them. This is considered to be another beneficial feature for a guard dog.

Dobermans are famous as a loving and loyal dog breed on the planet. Dobermans are less used by military and police departments because they have difficulty changing their handlers. But they are highly beneficial for family protection purposes.

Dobermans are very intelligent and are considered among the five most intelligent dog breeds in the world. Dobermans are apt problem solvers with complete determination and drive to accomplish the task.

Dobermans are highly trainable. According to studies, Dobermans can understand and learn any command more quickly than other breeds worldwide. Hence, they are among the most trainable dogs worldwide and are considered perfect for guard work.

Dobermans are naturally susceptible to strangers and don’t easily get along with strangers. They took their time to understand and socialize with others. In fact, according to different studies, female Dobermans are more suspicious of strangers than males. This is also another trait of a perfect guard dog.

Stay close to their owner.

Dobermans love to stay close to their owner, also known as Velcro dogs. Dobermans have a strong natural desire to stick to their owner’s side and don’t like to be left alone.

They love to have tasks and a natural drive to complete that work no matter what. They will not hesitate to physically intervene to protect their master if they sense any threat or danger. However, it is very difficult to discourage or stop them from continuing attacks or something else.

All these points mentioned above explained that the breed’s creator did an amazing job while selecting the species for breeding. He created a dog with maximum natural characteristics that are needed and perfect for protection work.

An untrained Doberman can showcase the natural protective behavior that is entirely instinctual to them. A few examples of the natural defensive characteristics present in a Doberman are given below.

If you are Dobie’s parents for a long time, you must have noticed that the Dobermans often sleep with their back to the wall and facing the doorways or the entrance. The Dobermans especially do this when they are sleeping with their owner in a new environment.

Staying close to their owner in new environments

Checking with their owner frequently.

If you let the Doberman roam around without a leash, then they will often periodically check back in with their masters.

Behave proactively and aggressively when their owner is anxious

The Dobermans are very protective of their owner. While their owner is out on a walk and becomes suspicious or tense in any unusual situation, Dobermans can sense this tension and act accordingly.

Check the perimeter of their property.

If you let your Dobie go into their yard after being kept away for a while, they will immediately run around the perimeter to look out or smell the area for any changes since they last left.

The abovementioned factors are a few examples of common behaviors you will witness in any Dobermans, even without training. Every Doberman has different natural characteristics that are incredibly useful for an owner who wants a dog for protection work.

Although Doberman is specially bred to work as a protection dog, the Doberman will not automatically protect its owner. Whether a Doberman will physically protect its owner depends on different factors such as the dog’s personality, confidence, level of training, and so on. Both the European and American Dobermans are most likely to physically intervene whenever they sense any danger. However, European Dobermans are likely to behave more aggressively than American Dobermans.

How to teach your Doberman to protect you

If you want to encourage your Dobie to protect you whenever the need arises, then you can do certain things such as

Dobermans are ideally bred for protection work. Their highly intelligent, loyal, protective, and loving nature makes them suitable for this job. Whether trained or untrained, Dobermans can protect their owners. So if you are looking for a dog who can protect you and your family without any disturbances, then Doberman is perfect.

Will a Doberman naturally protect you?

Yes, a Doberman can naturally protect you from any danger. Dobermans are specially bred to work as guard dogs and have the instinct to protect their owner. They are fearless, alert, intelligent, and loyal dogs. Dobermans are very fast and able to reach an intruder in a short period.

Do you have to train a Doberman to be protective?

Dobermans have the instinct to protect their master, but you can train your Doberman to get better protection.

At what age do Dobermans become protective?

Between the age of 18 to 40 weeks, the Dobermans will become protective and aggressive.

Signs Your Doberman is in Heat 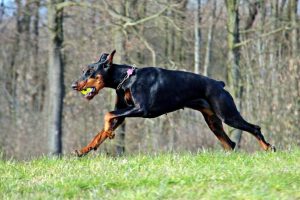 Doberman is a man-made dog breed that originated in Germany. This breed 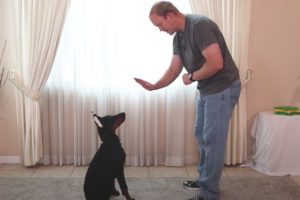 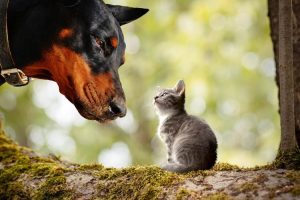