Dobermans are a big breed of dog, and they can grow quite large. Many people want to know when their Doberman will reach full maturity. This can depend on many factors, including the individual dog’s genetics and health. Most Dobermans will reach their full size by about two years old. However, some may take a little longer, while others may reach maturity sooner. So how do you know when your Doberman is fully grown? Every dog is different, but there are some things to watch out for that can help you determine whether your Doberman is done growing. Keep reading to learn more!

A Doberman will go through two major growth phases in its lifetime.

However, it is important to note that every dog is different, and some may reach their full size sooner or later than others. A few other factors can affect a Doberman’s growth, including diet and health. So, while most Dobermans will be fully grown by two years old, there is a chance that your dog may take a little longer or reach maturity sooner.

As you can see, a Doberman will go through several growth stages in its lifetime. It is important to understand these stages to provide your dog with the proper care and nutrition. Now, we will look in detail at each stage by type so that you know what to expect and how to care for your Doberman at each stage of life.

Cropping of Ears and Tails

One of the most distinctive features of the Doberman is its cropped ears and docked tail. This procedure is done when the Doberman is between two and four months old in most cases.

The cropping of ears and tails is a cosmetic procedure that is purely optional. However, many people choose to do it as it is thought to give the Doberman a more intimidating appearance.

If you decide to have your Doberman’s ears and tail cropped, it is important to find a reputable vet who has experience with the procedure.

The cost of ear cropping and tail docking can vary depending on the vet and your region. You can expect to pay between $150 and $600 for both procedures.

You may notice that your Doberman is chewing on many things during this time. This is normal behavior and is just the Doberman’s way of dealing with teething discomfort.

To help your Doberman through this process, you can give them chew toys or rawhide bones to gnaw on. This will help relieve some of the discomforts and prevent your Doberman from chewing on things that it shouldn’t.

If you notice that your Doberman has trouble teething, you can talk to your vet about giving them pain relief medication.

Male Doberman Pinschers typically grow between 26 and 28 inches tall, with the occasional individual reaching 32 inches. They generally weigh between 75 and 100 pounds, although some may be larger or smaller. Doberman Pinschers have an average lifespan of 10 to 13 years and reach maturity at around four years. They are considered a medium-sized breed and are known for their athletic build and elegant proportions. Doberman Pinschers are powerful dogs, and their strength is one of their most striking features. However, they are also highly intelligent and trainable, making them excellent companions and loyal protectors. A Doberman Pinscher may be the perfect breed whether you’re looking for a family pet or a Guardian for your home.

See Also: Can a Doberman Pinscher Be a Service Dog?

Doberman Pinschers are well-known for their loyalty and intelligence, but they can also be headstrong and stubborn. Fortunately, with the right training, they can be excellent companions.

Here are some things to keep in mind when training a Doberman:

Dobies are fully grown at about two years old. Breeders often dock the tails of Doberman puppies when they are very young so that the tail doesn’t get in the way as they grow into adulthood. If you’re considering adding a Doberman to your family, it’s important to understand how big this breed can get and make sure you have enough space for them to run and play. A Doberman can be a loyal and loving companion with the proper training for years to come.

How big will my Doberman get?

Is Doberman hard to train?

Dobermans are one of the most intelligent dog breeds and are relatively easy to train. However, like any dog, they will need patience, consistency, and positivity from their owners to learn effectively.

Are male or female Dobermans better?

The female is thought to have superior off-leash abilities to the male. Dobermans, in general, have great obedience skills off-leash; however, the female has better recall and is less likely to approach strangers or chase other dogs.

See Also: How much does a Doberman Shed?

When do Dobermans calm down?

Dobermans tend to be most active in their first two years of life but gradually calm down as they reach adulthood. However, they will still need plenty of exercise and stimulation to stay happy and healthy.

Training your Doberman: All you need to know

When it comes to choosing a Doberman, there are a few things

Dobermans are an amazing breed of dog that makes excellent pets. They 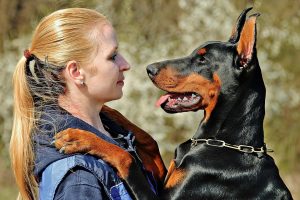 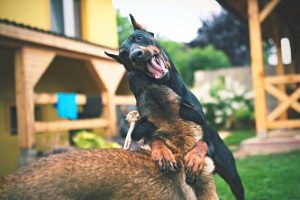